TCM in the Media – Oprah 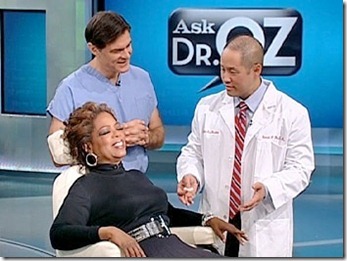 Oprah is ready to take a step toward the frontier of medicine…but she’s a little scared of the whole needle part. Daniel was ready to ease her fears. “The needles that [Daniel] is going to use would actually fit through the hole in the needle that they use to take the blood from your arm,” Dr. Oz says.

Oprah doesn’t suffer from those particular ailments, so Daniel recommends a wellness acupuncture treatment, which will help boost Oprah’s immune system. This normally requires about 10 needles, he says, and the positive effects will be felt anywhere from 20 minutes to days afterwards.

“It’s really not bad,” Oprah says. “It’s not as bad as getting your ears pierced, I’ll tell you that.”

The results are in! After a dozen needles were put in targeted places, Angela returns to the stage to report on how she feels.

Angela says she’s ready for more acupuncture treatments, too. This is good because Daniel says she’ll need a few more sessions to really cure her shoulder. “The key is to have a few treatments back-to-back-to-back so it builds up on itself,” he says. “Eventually she’ll have no pain at all.”